Dr. Boatright is a Research Biologist and Director of the Molecular Biology Core of the Rehabilitation R&D Center for Visual and Neurocognitive Rehabilitation (CVNR) of the Atlanta Veterans Affairs Medical Center (VAMC) and Professor in the Department of Ophthalmology, Emory University School of Medicine. He is a graduate of Brown University (ScB in Neural Sciences and Experimental Psychology) and Emory University (PhD in Pharmacology and the Neurosciences Training Program).

Dr. Boatright has two areas of interest. In the first, he uses in vivo pharmacological approaches to explore the effects of atypical, endogenous compounds on animal models of retinal degeneration and glaucoma. Current lead compounds include an agonist for the BDNF TrkB receptor and TUDCA, a bile acid. His second area of interest is studying the effects of exercise on retinal health, both in optimizing exercise regimens in humans and exploring mechanism in animal and cell culture models. These projects are funded by Merit and SPiRE Awards from the Veterans Administration, R01 and P30 grants from the NIH National Eye Institute, and long-term support from the Katz Foundation.

Dr. Boatright is founding and current editor-in-chief of Molecular Vision, a peer-reviewed journal dedicated to the dissemination of research results in molecular biology, cell biology and the genetics of the visual system. The journal is in the top three in a field of 14 competing journals and is routinely used as an open access exemplar by the National Library of Medicine and The National Institutes of Health Library. The journal is supported by Knights Templar, Zhongshan Ophthalmic Center, and through initiatives generated in the Department of Ophthalmology.  He is also a Section Editor for the Asia-Pacific Journal of Ophthalmology and he serves on the Editorial Review Boards of International Ophthalmology Times and the International Journal of Molecular Sciences.

Dr. Boatright is a member of the Board of Governors of the Association for Research in Vision and Ophthalmology (ARVO), the premier vision research organization in the United States. He was the 2011-2012 ARVO president  and served on its Board of Trustees from  2007 to 2013. He was made ARVO Gold Fellow in 2012 in recognition of his accomplishments, leadership, and contributions to the Association. He also holds memberships in the American Association for the Advancement of Science, the Society for Neuroscience, the American Society of Neurorehabilitation, and the International Society for Eye Research. More locally, he chairs the VAMC Institutional Animal Care and Use Committee and co-chairs the same committee at Emory University. 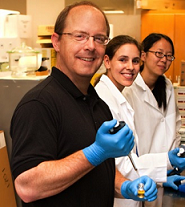