Dr. Yu received his medical (M.D.) and graduate (M.S. in Pharmacology) degrees in 1982 from the Capital Institute of Medicine and Institute of Pharmacology & Toxicology, Beijing, China. In 1990, he earned his Ph.D. degree in Physiology and Biophysics from the State University of New York (SUNY) at Stony Brook, New York, NY. Before coming to the United States, Dr. Yu spent one year at Lund University, Sweden, as a Research Associate. After earning his PhD degree at SUNY Stony Brook, he spent three years (1990-1993) as a postdoctoral fellow in the lab of Dr. Paul Adams at the Howard Hughes Medical Institute at Stony Brook. Dr. Yu then joined the Department of Neurology at the Washington University School of Medicine as an Assistant Professor. He was promoted to Associate Professor in 1999. In November 2002, Dr. Yu transferred to the Medical University of South Carolina (MUSC) as a tenure-track Associate Professor and was granted with his tenure position three years later. In 2008, Dr. Yu was recruited as a Professor to the Department of Anesthesiology, Neuroscience Division, Emory University School of Medicine.

Research in Dr. Yu’s laboratory has been focused on the mechanism of neuronal and cancer cell death and neuroprotection after hypoxia and ischemia in vitro as well as in animal models. His investigations contributed to the identification of novel ionic and molecular mechanisms that involve voltage-gated channels and ligand-gated receptors in apoptotic and necrotic cell death. He has published extensively in the area of cellular and molecular regulations of cell injury and regeneration under physiological and pathological conditions. Dr. Yu’s group developed the new strategy of preconditioning transplanted stem cells. They have demonstrated the multifaceted pro-survival and pro-regenerative properties of hypoxic preconditioned cells in vitro and after transplantation into the ischemic heart and brain. In recent years, he has collaborated with Dr. Thomas Dix and Dr. Ling Wei in the development of a novel pharmacological hypothermia therapy and demonstrated its protective effects against brain damages after ischemic stroke, hemorrhagic stroke and traumatic brain injury. He is also investigating pain induced deficits in cognitive and functional activities in animal models of CNS and PNS disorders. Cancer cell apoptosis and cancer pain regulation are other main topics in his research. These investigations take advantages of integrating cellular, molecular and animal technologies to develop effective and feasible therapies that aim to be translated into clinical practices. 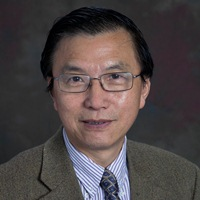